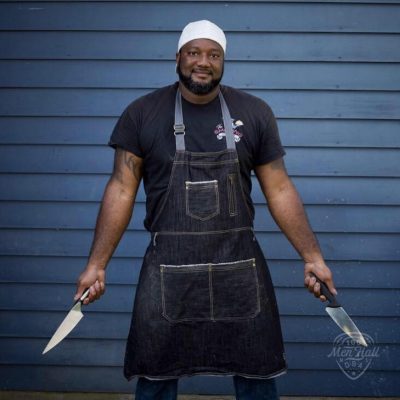 Chris Hayes is a Food Network star, culinary consultant and an entrepreneur with a heart for the community. A Louisiana native, Chris was born in Shreveport and fell in love with cooking by watching his elders joyfully prepare food for family gatherings growing up.

Chris began his career in the culinary industry at the age of 15, working as a dishwasher at a local pizza restaurant. An avid learner, Chris eventually landed a position on the waitstaff. It was during this time, that Chris that Chris learned the essential aspects of food preparation and restaurant operations. After graduating from high school, Chris attended Grambling State University and earned a degree in Business. Following graduation, he enrolled in the
Culinary Arts program at Louisiana Technical Community college, where he studied diligently for two years to earn his Culinary Arts degree.

In the years that followed, Chris’ education, experience and passion for food earned him the reputation as one of the region’s most creative and innovative culinary artists. He went on to work in a host of northwest Louisiana’s top hotels, restaurants and gaming venues. His zest for life and extraordinary skill afforded him the opportunity to earn an executive chef position in New Orleans, Louisiana. Known the world over for its rich culture, music, and cuisine –
New Orleans proved to be an essential ingredient in the next phase of Chris’ career.

In 2013, Chris took first place in the Oyster Jubilee. Following that win, he set his sights on earning a spot on the Food Network. He applied repeatedly over the next three years, but to no avail. Until finally, in January of 2017, he got the call. The hit Food Network television show, “Cooks vs. Cons” extended him an offer to appear on the show and. Chris accepted the invitation, and ultimately won the competition.

Now a household name, Chris has been featured on talk radio, numerous local television programs, and in Louisiana Cooking and Road Tours Magazine. Over the years, Chris has used his success as a platform to encourage at-risk youth and aspiring culinary artists, both in his hometown of Shreveport and the city of New Orleans, by donating his time and resources to community-based programs and cultural events.

In fall of 2016, Chris launched the Smoking Oyster Catering and his new cookbook, “Welcome to Good Food” is slated for release in the summer of 2018. He is available for speaking engagements, culinary coaching sessions and catering opportunities.